Lately we’ve been slumped over on the sofa, unmoving, glassy-eyed, barely blinking and uncommunicative.

We’re okay, though. The only “virus” we’ve succumbed to (so far—knock on wood) is the addictive stupor of movie bingeing while locked up inside like everyone else.

During these dazed purgatorial viewings we’ve stumbled across that strange convention of mainly Sci-Fi movies but also lots of action movies, diminishing to a lesser degree as you delve into the other genres, where the black character is either the first one killed off or just eventually killed off period.

It may not be amusing on many levels but on at least one level it’s jaw-droppingly hilarious. So I’m gonna name a few of the most outlandish examples as an ode to the absurd, an elaborate Elizabethan bow to the comically bizarre.

In The Lazarus Effect, Olivia Wilde kills her friends one by one in admittedly unpleasant ways. But while they later go out by choking, poison, and the swift, clean, preferable death of neck snapping, the first person she kills is Donald Glover of Community, the Martian, and Solo: A Star Wars story fame, and his death is spectacularly violent compared to theirs–namely being telekinetically hurled across the room into a locker and then crushed inside like a car compacter.

Remember The Transformers? There’s a “black” robot in The Transformers! Jazz! Guess what happens to him. He dies! Not right away, later, but who cares? He still dies! The “black” Transformer robot gets killed off!

Jazz’s curtain call actually didn’t bother me that much, since he was somewhat of an annoying cliché, even as a robot, but still…really?

One of the most ironic and farcical deaths in schlocky sci-fi history happened to Ernie Hudson of Ghostbusters fame in Leviathan from 1989. Having survived all the horrors below and actually having made his way to the surface along with two others, he is summarily consumed by the monster (which was supposed to be dead) seconds before the other two characters scramble onto a helicopter and are whisked away to safety.

I’m not sure when this started in earnest. Maybe the ‘80s? Certainly the ‘90s.

Because looking back, in opposite world, we can’t forget that Yaphet Kotto almost made it to the end of Alien in 1979. And he gets knocked off at exactly the same moment as Hollywood darling Veronica Cartwright.

In Carpenter’s The Thing from ’82, Keith David DOES make it to the end with Kurt Russell. I never can remember his name because he has two first names. David Keith? Keith David? 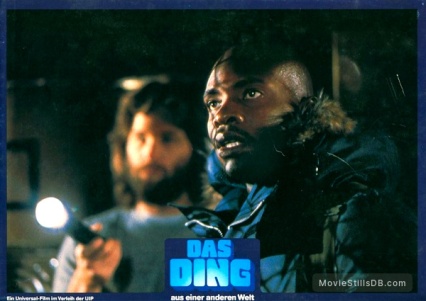 Similarly, Keith David survives in 1988 for most of They Live, and in a pretty big role too.

They Live, by the way, was based on a mere short story by Ray Nelson from 1963. A tiny five-page short story called Eight O’clock in the Morning, a commentary on modern-day slavery,  toiling in the shadow of capitalism and getting absolutely nowhere while the powers that be continually insist that all you need to do is buy things, have fun, and “obey” to have a good life.

It had always irked me that Kubrick kills Scatman Cruthers in The Shining, because having been a huge Stephen King fan as a teenager, I knew Scatman’s character didn’t die in the book. I didn’t know if Kubrick’s subconscious was buying into the stereotypes like everybody else or if it was just a director’s ego. Still, Scatman almost made it to the end.

After the ‘70s, ‘80s and early ‘90s, though, I think hiccups like The Thing, They Live, and Alien became few and far between as the black sacrifice to the movie gods started becoming a “thing.” They even made fun of it with Omar Epps in Scream 2 in the late ‘90s.

A movie favorite of mine, 300, has Leonidas kicking the (black) Persian messenger into a well, and even though 300 was based on a comic book, the actual Spartans from history were not the righteous defenders of all good in the world, and the Persians were not the monsters and villains they were made out to be.

One of the best lines from the movie, though, from Xerxes, the 9-foot tall Persian King, speaking to Ephialtes: “Unlike cruel Leonidas who demands that you stand…I require only that you kneel.”

Which sounds a lot like the Chinese “curse” that says, “May you live in interesting times.”

The words sound really good at first, right? Then little by little you start to realize, hey, wait a minute…

But by then, it’s too late.

One of the most ironic deaths ever—even more than Ernie Hudson getting dispatched by the monster two seconds before his cast mates are saved—is that of Duane Jones in Night of the Living Dead from 1968.

Duane Jones had a starring role as a strong character and capable leader (something fairly unheard of during those days) during a Zombie crisis and who—like Mr. Hudson—made it all the way through to the end… only to be shot by police… who thought he was undead.

But, boy, we were on the right track once with casting. I wonder what happened. One thing, though: it won’t last forever. This, too, shall pass. And become a footnote in history.

So as my husband and I slowly de-evolve on the sofa before the flickering Netflix screen, and maybe you do, too, we can add to the growing list of acronyms with lighthearted humor as we wait for perspectives to change, society to shift (if even a little; already the skies are cleaner!) as the light at the end of the tunnel gets nearer:

SNNSFC: Saying no to Netflix and Sci-Fi Channel

TRHTDFDC: Trying to remember how to do fractions during coronavirus

SOTWDL: Staying on the wagon during lockdown

NSOTWDL: Not staying on the wagon during lockdown

SPPUZAWARTJSFWT: Surviving the pandemic/possible upcoming zombie apocalypse while any race by telling jokes, sharing food, and working together